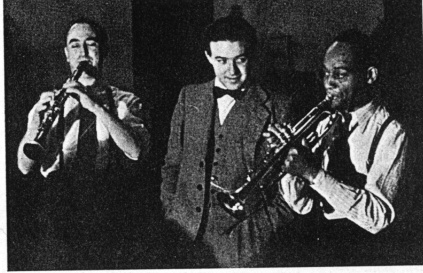 On November 28, 1938, Tommy Ladnier fronted, for the first time on record, his own orchestra. Again, Sidney Bechet was invited. Most known of these recordings is the classic Really the Blues. However, shown here is When You and I Were Young, Maggie, a “parlor song” composed in 1866. During Sidney Bechet’s melody statement, Tommy can be heard playing some background motifs well suited to the melody. He then steps forward with his solo. It is largely based on the theme and the counter-theme from the first chorus. It is technically not a flawless solo, but it has some very interesting features. First, it is completely well worked out and very melodic, swinging freely. In fact, it is now difficult to hear any King Oliver influence; instead, it is to some extent in the Bunk Johnson vein of playing. This is utterly interesting, as Tommy now seems to have made a circular movement back to his primary inspiration. This is even more interesting as Bunk Johnson had been inactive for many years and his comeback was still three years ahead. This Tommy Ladnier solo is very seldom referenced, maybe due to the fact that it is somewhat atypical. This is a pity, since it is a very good and interesting solo and in some ways one of his best.

From another session, Ladnier teamed up with Mezz Mezzrow, recording If You See Me Coming’. Two takes were (luckily) preserved. These takes clearly shows Ladnier's ability to vary his playing and develop ideas.

When You and I Were Young, Maggie (Excerpt)

If You See Me Comin' Take 1 (Excerpt)

If You See Me Comin' Take 2 (Excerpt)