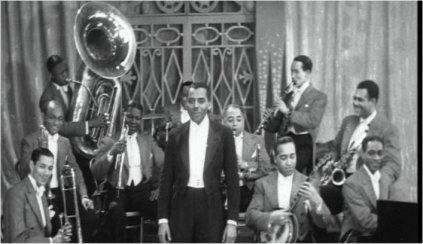 In 1930-1931, Tommy Ladnier worked for Noble Sissle. His playing now was less frantic – partly because the Sissle orchestra did not exactly invite to such playing – but there are some good examples of his now more simplified playing during this venture. In this orchestra Sidney Bechet also played.

The solo on Loveless Love displays a subdued inner force and The Basement Blues allows Ladnier to give some heated variations on the melody. Ladnier is here preceded by a Sidney Bechet solo on soprano sax. (The first trumpet solo on the Basement Blues is by Arthur Briggs, not heard here.)